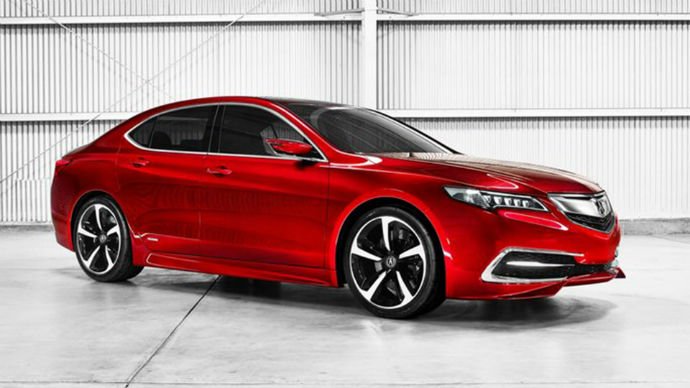 All 2016 TLX models come standard with dual 7- and 8-inch infotainment displays, Bluetooth, USB and aux ports, rear-view camera, satellite radio, seven speakers, and Siri Eyes Free connectivity.  Unfortunately, using a dual-screen infotainment system can be frustrating. Some functions are duplicated between the lower 7-inch touchscreen and the upper 8-inch display. Below the touchscreen is additional volume and climate control buttons, but these tend to complicate the system’s interface rather than be helpful.

The Acura TLX has five seats. Its front seats are comfortable and supportive and offer generous head and leg room. Rear legroom is adequate even for adults, but rear headroom is a bit tight for taller passengers. Heated seats are standard; ventilated and leather seats are available. The TLX’s cabin is quiet and the instrument panel is elegantly designed. Most interior materials are also of good quality, although there are lower quality plastics in some areas. TLX has two full sets of LATCH connectors for securing child seats. IIHS gave the vehicle’s LATCH system a Marginal score for ease of use, as some anchors are difficult to access.

The Acura TLX has two engine options: a 206-horsepower four-cylinder and a 290-hp V6. The four-cylinder engine provides ample acceleration, and its eight-speed dual-clutch automatic transmission provides fast, smooth gear changes. However, it feels overwhelming for a sports sedan. V6 is a better option. It accelerates more assertively and delivers superior passing power – without much reduction in fuel economy. However, its nine-speed automatic transmission tends to upshift and downshift very frequently. Front-wheel drive is standard on both engines; all-wheel drive is only available with the V6. The TLX’s four-cylinder engine gains an EPA-estimated 24 mpg in the city and 35 mpg on the highway, which is good for the luxury mid-range class. The V6 gets 21/34 mpg city/highway when equipped with front-wheel drive and 21/31 mpg with all-wheel drive.