The 2023 McLaren Artura is a hybrid sports car designed and manufactured by British automaker McLaren Automotive and scheduled to enter production in 2021. McLaren embraces a hybridized future of high performance with its sculptural 2023 McLaren Artura supercar. The newly introduced mid-engined two-seater rides on a new lightweight platform. 2023 Artura also pairs the company’s first twin-turbo V-6 with a battery-electric powertrain to create a plug-in-hybrid model, producing a combined 671 horsepower and 531 pound-feet of torque. 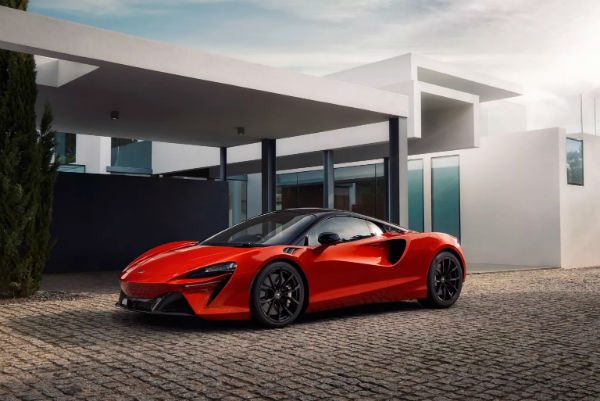 Performance estimates are highlighted by a zero-to-60 mph time of 2.6 seconds and a top speed of 205 mph. The McLaren Artura bodywork is fully finished with prominent air vents and scissor-style doors. In addition to better quality and spacious interior than the 720S, the 2023 Artura offers a variety of convenience and driver assistance features.

Inside, 2023 Artura largely showcases McLaren’s approach to function before fashion. However, the cabin is adorned with more flamboyant materials such as leather and micro suede. There’s also less visible carbon fiber than is typical in other models. Still, the company is known for its minimalist cabin designs, which include a steering wheel with no buttons and limiting the presence of physical switches, and Artura is no exception. It comes standard with power-adjustable seats, and McLaren seems to have excellent exterior visibility to help drivers position the vehicle precisely on the road or racetrack. While not as spacious as the McLaren GT, the Artura has 6 cubic feet of luggage space in the front trunk.

While the infotainment system in the 2023 McLaren is typically an afterthought for shoppers, the Artura has a distinctive 8.0-inch vertical-orientation touchscreen with the usual specs. 2023 McLaren Artura is equipped with Bluetooth connectivity, onboard navigation, a SiriusXM satellite radio, and various audio equipment. Those who want to keep their car as light as possible will opt for a stereo with fewer speakers, while others may want to upgrade to a more powerful surround sound system.

The electric motor used in the Artura produces 95 PS (94 hp; 70 kW) and 225 N⋅m (166 ft-lb) of torque. Since the output is limited to optimize drivetrain drivability characteristics, the combined torque peak is less than the sum of both sides. The 7.4 kWh lithium-ion battery pack weighs 88 kg (194 lb) and is located under the rear of the passenger compartment. McLaren claims 2.5 hours for an 80 percent charge using an EVSE cable and an electric range of 19 miles, according to European testing methodology. The engine replaces the reverse gear, similar to the Ferrari SF90 Stradale. The combined mass of all electrical components is 130 kg (287 lb), which means the Artura has only 46 kg (102 lb) more curb weight than its predecessor, the 2023 McLaren 570S. The Artura has a range of 19 miles (30.6 km) in electric-only mode.

According to the manufacturer, the McLaren Artura can accelerate to 100 km/h (62 mph) in 2.9 seconds, 200 km/h (124 mph) in 8.3 seconds, reach a maximum speed of 330 km/h (205 mph) and mile (402 m) time is 10.7 seconds. According to the EPA, the Artura is good for 17 mpg city and 21 mpg highway, but the electric driving range included in it is also rated up to 39 MPGe. When he gets the opportunity to run one on our 75-mile highway fuel economy route, which is part of an extensive testing regimen, we can evaluate its real-world mpg.