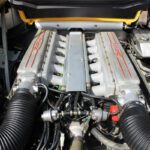 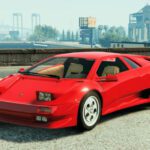 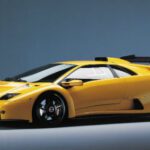 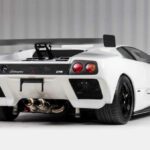 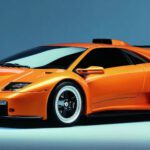 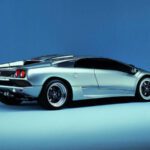 Chrysler Corporation bought the company in 1987, funding it to complete the development of the car, management became dissatisfied with Gandini’s designs and commissioned the design team in Detroit to carry out a third comprehensive redesign, smoothing out the notoriously sharp edges and corners of Gandini’s original. The Diablo roadster concept showed what a possible open-top version of the car would look like. The roof was raised and the car had a shortened visor in place of the windshield leading to the doors, which showed the adaptation of the Barchetta body style.

The Lamborghini chassis was strengthened to compensate for the roof loss, and the car featured many unique components, some of which went into later variants of the Diablo. Such components included larger air intakes near the rear wing and sides of the car for better engine cooling, a visor-mounted rear-view mirror, roll bars above the seats, unique body-colored wheels, and a unique engine cover. It featured a tunnel in the middle for better airflow over the rearview mirror. 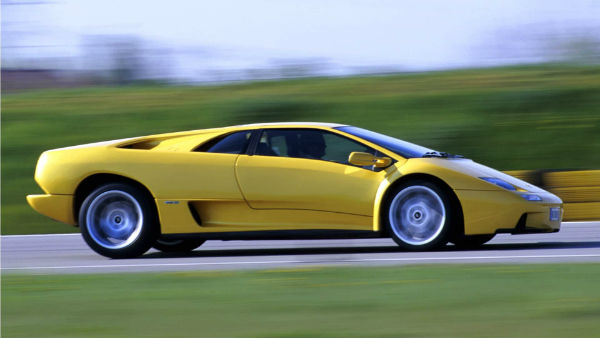 The signature scissor doors have been preserved despite the disappearance of the roof, and the interior has become more ergonomic and features a unique two-tone beige color. The concept caused a positive reaction among the public, and demand for such a car arose among customers. Since the car was not designed for production, German tuner Koenig Specials has converted customer cars into replicas of the concept, courtesy of Lamborghini. The Lamborghini cars had different front and rear bumpers with wheels due to copyright issues with an upgraded engine.

The Diablo SV-R had a simplified interior with a roll cage, racing seat, and removable steering wheel; power window side windows have been replaced with fixed Plexiglas with traditional racing-style sliding sections. On the exterior, the electric pop-up headlights have been replaced with either fixed units or open ducts for the front brakes. A larger, deeper front spoiler has been fitted, the rear bumper has been replaced with a diffuser assembly, and the traditional Diablo “wing” has been replaced with a truly adjustable carbon fiber spoiler. Side skirts were added for aerodynamics, but this left so little ground clearance that pneumatic air jacks also had to be fitted to raise the car for service in the pit lane; similar jacks can be seen in use on the newer Ferrari F430 Challenge. Lightweight, hollow center-lock OZ wheels were used, but these were later converted to more powerful Speedline units. Linear ratio springs were used with cone dampers and were tuned to about twice the stiffness of the stock Diablo SV suspension. With all modifications, the SV-R was 1,385 kg (3,053 lb), 191 kg (421 lb) lighter than the factory SV.

A new car was developed based on the Diablo SV, which later became the basis for the infamous Diablo GT and Diablo GTR, called the Diablo GT2, and featured a degraded variant of the 6.0 L V12 engine used in the Diablo GT1 Stradale. The interior was stripped of all luxuries and included an integrated digital speedometer, fire suppression system, racing cut-off switch, removable engine cover with a quick-release system, plexiglass windows with sliding partitions, integrated roll cage, a racing wheel with quick-loading. fuel cell system instead of the traditional fuel tank, center locked wheels and a large CFRP fixed rear wing. Many of the car’s features have been carried over to the Diablo GT, and later Lamborghini models like the massive air intake at the front, removable hoods, central dual exhaust system, and the engine itself, which isn’t suitable for road use. The project was shelved when Audi took over the company. The car was given an update in 2002 and was known as the Diablo GT2 Evoluzione, which featured different front and rear bumpers, a rear wing from the Diablo GTR, and a modified air intake system for the engine, but the car was never raced.

After four years of campaigning the Diablo SV-R in the Diablo Supertrophy, Lamborghini has launched an entirely new car for the 2000 season. To save weight, the interior of the GTR was stripped; air conditioning, stereo, sound, and heat insulation have been removed and a 6-point seat belt, MOMO fire extinguishing system and steering wheel, fully integrated roll cage, fixed plexiglass windows with sliding partitions, and a single racing seat with fresh air intake are installed. The GT already had a radically designed body, but the GTR took that a little further with features like a massive rear spoiler bolted directly to the chassis like a real race car, 18-inch hollow magnesium Speedline center lock wheels, and pneumatic air. jacks for raising the car in the pit lane and an emergency fuel shut-off switch on the left front fender.

The GTR used the same basic 6.0-liter V12 engine that debuted in the street-legal GT, but with revised fuel and ignition systems, individual throttle bodies, a dynamic air intake duct system, variable valve timing, titanium connecting rods, and a lightened crankshaft. These improvements have resulted in the engine producing 598 PS (440 kW; 590 hp) and 640 N⋅m (472 lb-ft) of torque. The engine was bolted to the regular 5-speed gearbox in a rear-wheel drive setup. Extra heat exchangers have been added to the differential and transmission oil to prevent overheating in extreme racing conditions. The standard gas tank was replaced by a racing fuel cell that quickly filled up. The suspension was stiffened and lowered and racing brake calipers were fitted.