Land Rover Sport can climb hills and ford rivers far better than rivals such as the BMW X3, Porsche Macan, or Mercedes-Benz GLC-class, but those SUVs all drive with more gusto on paved roads; the Macan thinks it’s a sports sedan. The 2023 Discovery Sport’s interior mimics the trappings of its more upscale stablemates and can be ordered with seating for seven, a rarity in this class. Overall though, the Discovery Sport lacks the panache and appeal to make it a leader in the compact luxury SUV segment.

The interior of the 2023 Discovery Sport is available in a seven- seat configuration, with the front row featuring two seats and three seats on the second row. The second-row seats slide and recline, and fold in a 60:40 configuration, folding forward to allow access to the third row of two seats where fitted. The third row of seats is not intended for full-time usage and is described by Land Rover as being suitable for children up to the age of 15 and occasional adult use. They fold flat into the floor of the trunk when not in use. Isofix mounting points for child safety seats are fitted as standard. 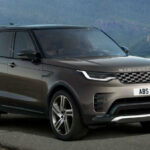 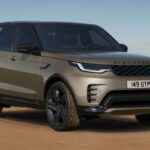 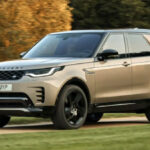 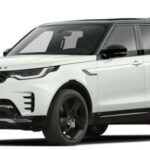 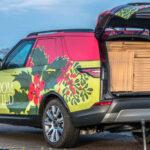 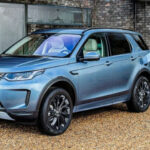 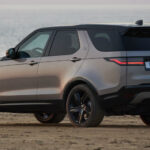 The central console features an 8 inches touch screen allowing access to in-car entertainment, satellite navigation, and vehicle settings. The system, shared with the Jaguar XE, allows smartphone connectivity and some models allow the owner to control the vehicle remotely, pre-heating the interior or unlocking the car using a smartphone application.

The Land Rover Discovery Sport features a steel monocoque, the bonnet, wings, roof, and tailgate are made from aluminum and a panoramic glass sunroof is available either as standard or as an optional extra depending on the model variant. A powered tailgate can also be specified as an option, featuring remote control operation. In certain markets, the bonnet is fitted with an airbag to improve pedestrian survivability in the event of a collision. The airbag is mounted in a panel at the trailing edge of the bonnet panel and protects a pedestrian’s head from striking the base of the windscreen.

The Discovery Sport was initially powered by the same engine that came out of the first-year Freelander 2 model, the Ford EcoBoost four-cylinder 2.0-liter turbocharged petrol engine that produces 240 PS (180 kW; 240 hp) and Ford. Duratorq four-cylinder 2.2-liter turbocharged diesel engine, producing either 150 PS (110 kW; 150 hp) or 190 PS (140 kW; 190 hp). The engines taken from Ford have been replaced by new Jaguar Land Rover engines for the Ingenium engine since late 2015. The Ingenium family is a series of four-cylinder turbocharged engines with 2.0-liter power, built into 500cc cylinders. The family produces both gasoline and diesel fuel and can be produced in 3, 4, and 6 cylinders in the future, depending on demand. The list was designed from scratch to accommodate a variety of hybrid electrical systems, and it was expected that there would be a separate plug-in hybrid.

The Ingenium engine can be designed to deliver a wide range of power, while the most fuel-efficient Discovery Sport D4 comes out with a 150 PS (110 kW; 150 hp) 2.0-liter four-cylinder turbocharged diesel engine on the front wheels. -drive only the configuration. This model is designed to have CO2 emissions of 119 g / km and a fuel economy of up to 24.2 km / L (68 mpg-imp; 57 mpg-US). The engines in Discovery Sport are connected at the opposite, resulting in more space inside.