The Bugatti La Voiture Noire is a luxury GT supercar from French automobile manufacturer Bugatti. The Bugatti La Voiture Noire was presented at the 2019 Geneva International Motor Show, this unique model is based on the Bugatti Chiron.  The La Voiture Noire pays tribute to the Bugatti Type 57 SC Atlantic produced in four copies, one of which, the black 57 Atlantic, Jean Bugatti’s personal vehicle, has disappeared between Molsheim and Bordeaux and has never been found. One of the most expensive and fastest automobiles in the world, it was specially ordered by a customer for 11 million euros excluding taxes.

The La Voiture Noire Black Car is designed by Bugatti designer Étienne Salomé. Bugatti Noire is inspired by the Bugatti Type SC57 Atlantic and based on the Chiron produced since 2016. Its final version is presented by means of a press release on June 3, 2021, more than two years after its world premiere. The sleek design includes headlights built into the front fenders and plenty of room for cooling. A central spine running from the hood to the tail is reminiscent of Bugatti’s historic assembly process. 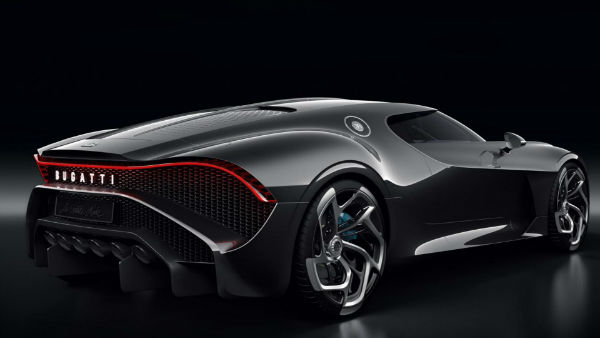 The body panels of the Bugatti La Voiture Noire are carbon fiber and perfectly match the right angles. A one-piece taillight accentuates the curves of the quarter panels. The rear bumper is a thin strip that bisects the mesh padding panel. The idea that a bus-built car meets all modern crash and emissions laws is mind-blowing.

The shiny carbon fiber neo-retro-futuristic fastback bodywork is entirely hand-made at the Bugatti factory in Molsheim, Alsace. The aluminum dorsal edge of the low roof, down to the famous horseshoe grille recalls those of the Bugatti Aérolithe and Bugatti Type SC57 Atlantic of the 1930s