The 2023 Audi RS4 / 2023 Audi RS 4 is the high-performance variant of the Audi A4 series produced by Audi Sport GmbH for AUDI AG. Like Audi S4, Audi RS4 is based on the A4 platform.  Like other Audi “RS” cars, the RS 4 pioneers some of Audi’s latest cutting-edge technology. The Audi RS4 Avant may be very comfortable with the right specs, but its handling has been surpassed by performance car rivals like the Alfa Romeo Giulia Quadrifoglio and BMW M3.

The Audi RS4 Avant is one of the very few performance cars offered in estate car form and is an interestingly attractive combination. In fact, the only fast estate car that can be considered a direct competitor to the RS4 Avant in the new automobile world is the BMW Alpina B3 Touring. Available only with Audi’s Torsen-based “trademark” Quattro permanent all-wheel drive system. Audi RS 4’s main market competitors include the BMW M3, Mercedes-Benz C63, Lexus IS-F, and Cadillac ATS-V.

Inside, the RS4 interior should be less splashy compared to its exterior design compared to the standard A4 models. The basic interior layout is one of Audi’s older designs, with a high-mounted display and physical controls for the air conditioning below. The build quality overall is excellent though, and so are the materials that mercifully avoid the need to wrap every surface with faux leather and pointless stitches. The leather used on the seats, door trims and console is Audi’s wonderful waxed Nappa material. Unless you’re diving into Audi’s Exclusive range, interior colors and trim are somewhat limited to black-on-black and there’s some colored stitching here and there, but the overall aesthetic is solid. 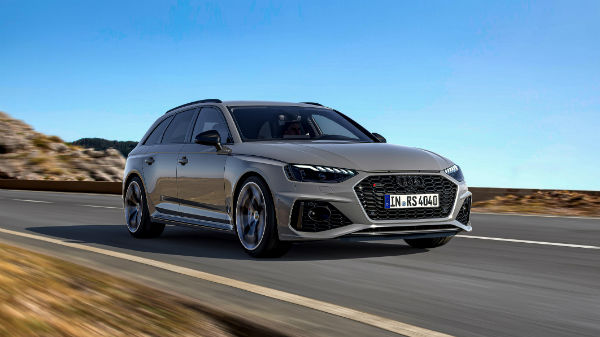 The trunk of the 2023 RS4 Audi offers slightly more overall storage capacity than the BMW Alpina B3 Touring, but there isn’t much in it. The touchpoints are also reassuringly solid and the slim, solidly perforated leather steering wheel is neither too big nor too small, but some may still find the flat base a bit uncomfortable. Retaining the rear seats involves the same process as on the regular Audi A4 Avant, which can pull the levers from the tailgate opening, and the backrests fold in one motion. It folds up in a 40/20/40 pattern, giving you more options when you need to haul long loads and people in the back, leaving a flat, elongated loadspace after unloading.

The 2023 Audi RS 4 comes with a new 2.9-liter twin-turbocharged V6 engine developed in partnership with Porsche. Besides its application in the RS4 and RS5, this special V6 is also found in Porsche’s Cayenne S and Panamera S models, and the updated Macan Turbo. While the previous V8 was coupled to a dual-clutch transmission, this RS4 handles it with an eight-speed torque converter automatic.

While the RS4 may lack the obvious grunts of its closest rivals, it’s also the only all-wheel drive model in its class. Besides the obvious benefit of improved wet-air traction, it means the RS4 is fast even at standstill, reaching 100 km/h in 4.1 seconds, nearly identical figures to both the old Mercedes-AMG C63 S Estate and Alfa Romeo Giulia Quadrifoglio.

Euro NCAP did not rate the 2022RS4, the Audi A4 Avant on which it was based was given five stars out of five for safety reasons. Quite a few issues were noted that weakened the adult occupant protection it provided, notably the possibility of chest injuries, and the Alfa Romeo Giulia managed to score much higher category scores. Automatic emergency braking (AEB) is standard and blind spot monitoring is added to the Vorsprung equipment. The 2023 Audi RS4 also performs well over the competition in terms of security.