The 2025 Airflow Concept is what the future will look like, with Chrysler’s sleek lines, sculptural frame, and modern and spacious interior that shines in the calm ambient lighting. Everything is designed for performance and customization. The aim is to show the evolution of the automobile as its ancestor. Airflow is powered by an electric motor and a modern Chrysler EV design. Shaped like a compact SUV, the lines are fluid yet muscular. 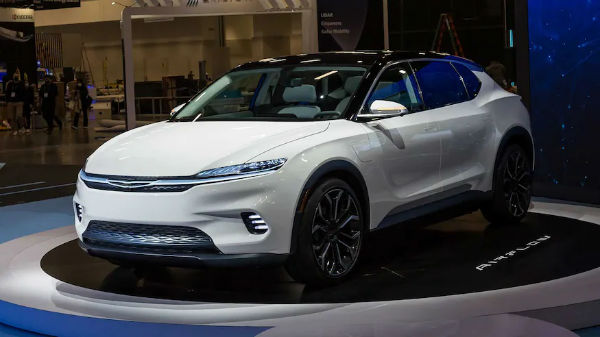 The wheels are wrapped in their arches and the grille features an illuminated Chrysler wing logo. Inside, all hardware is digital except for the start button and steering wheel navigation keys. The display interface can be customized, each passenger can access the vehicle information in real time. The vehicle control system will be one of the first to benefit from the STLA Brain software architecture, an artificial intelligence-driven driver assistance and experience ecosystem for Stellantis vehicles.

The Chrysler 2025 Airflow Graphite Concept is the alter ego of the Chrysler Airflow Concept. Paired with Cyprus Copper accents, the Galaxy Black exterior body color was inspired by an urban mentality that exudes a more serious, sinister yet sophisticated demeanor. This is in stark contrast to the Airflow Concept’s Polar White. Attached to the aerodynamic shape are full-width crystal LED light wings at both ends of the vehicle and a new Chrysler Wing logo at the front. Inside, the contrast between the lightness of Ice Gray and the warmth of Cypriot Copper adds a Zen feel and modern richness to the interior.

The Airflow concept has a four-seater arrangement, but the production car is likely to have a more traditional five- seat layout with a rear row. With its glass roof and futuristic design elements, the cabin looks airy and spacious. While Chrysler hasn’t provided measurements, the rear cargo area appears to hold a decent amount of stuff. The Airflow concept features multiple screens, including driver and passenger screens, a central infotainment screen, and rear seat entertainment screens. Chrysler says these displays use a new software interface and are able to download updates over the air.

The Airflow concept car has a twin-engine setup with electric motors front and rear. The optional twin-engine setup provides all-wheel drive, and a single-engine setup with either front- or rear-wheel drive will likely be standard. Chrysler claims the Airflow has a 118.0 kWh battery pack that will provide a range of 350 to 400 miles. This would make it competitive with Ford and Tesla’s longest-range versions of today’s EVs. We’ll update this section as information on EPA range estimates becomes available, and we hope to eventually get Airflow running in our real-world 75 mph highway range test.